For a variety of diet types, sour cream is a no-go. In fact, it’s not exactly the healthiest ingredient out there, so it might not be the greatest choice for anyone’s diet.

Even if you are #TeamSourCream, you might be in need of a sour cream substitute if you realize too late that you had finished off your last container already.

Whatever your reason for looking for a sour cream replacement, we’ve got a whole list of great alternative sour cream options to choose from. Disclosure: Opinions expressed are our own. If you buy something through any of our affiliate links on this page, we may earn a commission at no extra cost to you. Thanks for supporting our site!

What is sour cream?

Sour cream is basically regular cream that invited some bacteria to the party to get some lactic acid into the mix. To qualify as sour cream under FDA standards, the product must have at least 18% butterfat content.

Light sour cream versions are available. With these, the fat content is basically watered down with milk, but then other ingredients are added to stabilize the mix and make the texture similar to regular sour cream.

If you’re simply looking for a less fatty version, light sour cream might be the perfect solution.

A warning to anyone on dietary restrictions: commercially-made sour cream can have other added ingredients that clash with your diet. Always check the label, or take matters into your own hands and make your own sour cream! 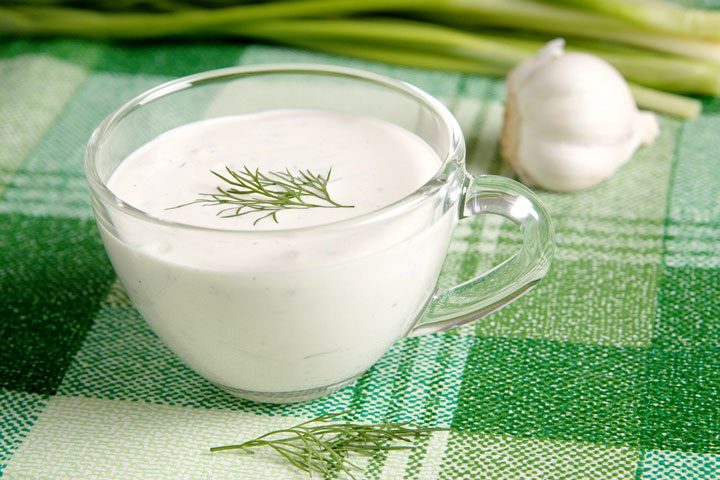 What is sour cream used for?

Sour cream is best known as a topping, for dishes like nachos, baked potatoes, soups, chilis, and more.

People love the smooth, creamy texture that delivers a unique, slightly sour flavor. For those same reasons, it often finds a happy home in many dips and sauces too.

You can also use sour cream as a thickening agent, so don’t be surprised to see sour cream listed as an ingredient in soups and certain sauces.

On top of that, sour cream is used in a wide variety of baked dishes, both sweet and savory.

Baked desserts in particular benefit from sour cream because it provides acids just like milk does, but in a creamier form that mixes better with batter. This often results in a final product that is fluffier and more moist. 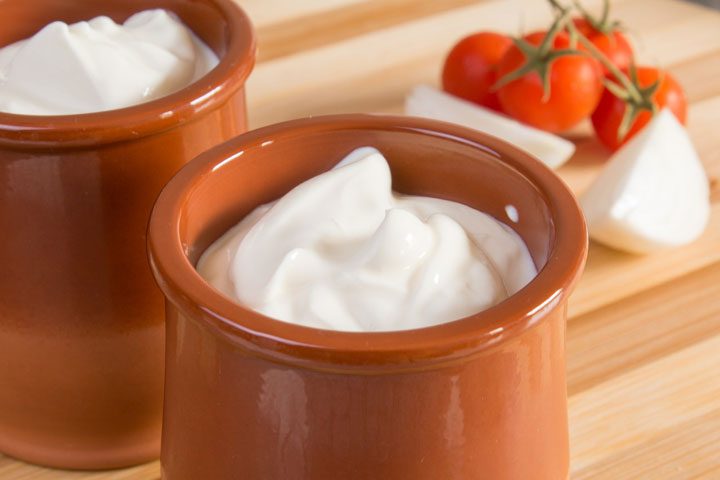 How to make your own sour cream

Sour cream is easy enough to make, if you want to try homemade.

Put both ingredients in a sterilized mason jar* and shake vigorously to combine. Then let sit, covered, at room temperature for 24 hours. Voila!

Keep in mind that freshly made sour cream will be slightly runnier than the stuff you’re used to. A short stay in the fridge will fix that problem. 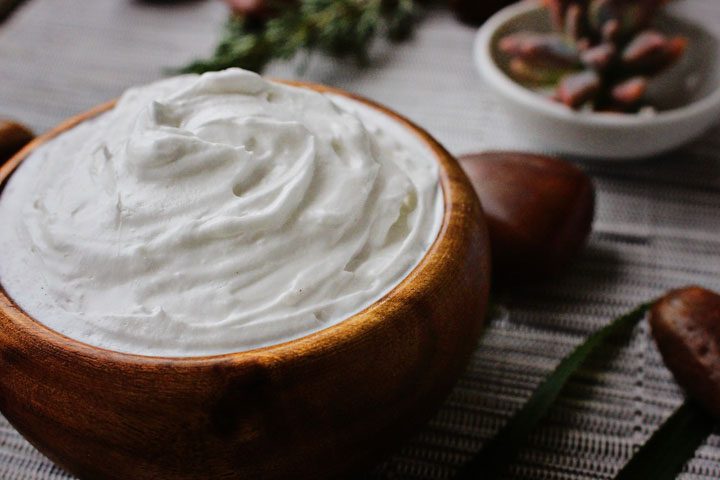 If you don’t have the time or interest to make your own sour cream, the good news is that substitutes for sour cream abound.

Before you take your pick of sour cream substitutes, though, here are some smart tips to consider:

With that in mind, let’s get to our sour cream replacement recipes!

If it’s for baking, try to match the fat content of sour cream by using whole milk yogurt or incorporating a little butter or oil.

Because it is a liquid rather than a solid, this substitute won’t work as a replacement for sour cream topping.

It can, however, work as a pretty good substitute for baking purposes. Adding a little butter helps to improve the texture. 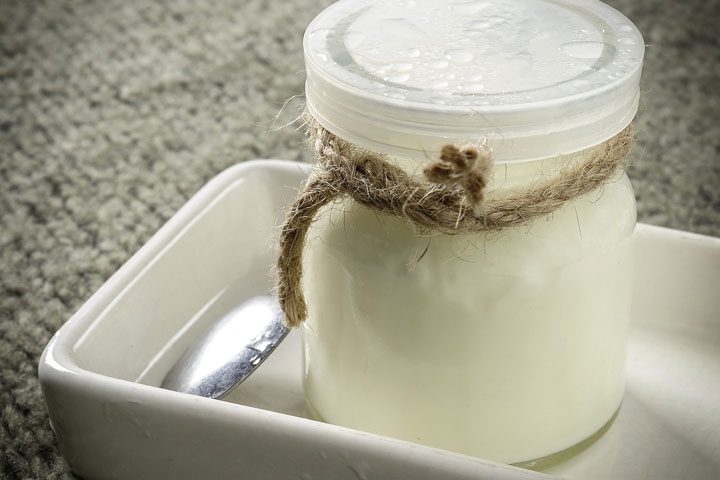 If it’s more the texture rather than sour flavor you are after, regular yogurt can work as a substitute for sour cream also.

Because it’s slightly less thick than regular sour cream, consider straining the yogurt to make it a closer match if the thickness matters to you.

Fortunately, there’s a super easy way to do that:

Yogurt also has less fat than sour cream, so that might affect the tenderness and browning of baked items. To create a fattier, more suitable choice, blend equal amounts of yogurt, heavy cream, and mayonnaise.

Light mayonnaise can work in place of sour cream for dishes that simply mix it in, such as pasta salads or dips.

As mentioned before, there’s also the option of blending mayo with equal parts heavy cream and yogurt to yield a mix closer in texture to sour cream.

Kefir is a fermented milk product that shares a lot of properties with buttermilk. As such, kefir can be used as a substitute for sour cream the same way that buttermilk can be. 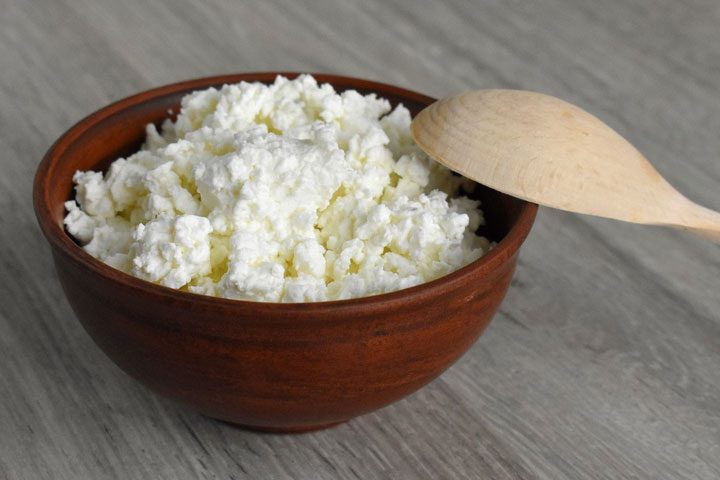 This high-protein option is way healthier than regular sour cream, plus it doesn’t come with so much fat and calories.

Blend the cottage cheese and milk together to make your sour cream substitute, with a teaspoon or two of lemon juice to add some sourness if you’d like.

With a little water and a lot of powdered sour cream, you can recreate "fresh" sour cream.

If you aren’t too picky, the reconstituted sour cream can work as a straight topping, but where this substitute option really excels is in recipes where the sour cream is cooked into the final dish.

Technically, you could use this as a substitute for sour cream, but we’ll be honest: it’s a lot less healthy for you and tends to cost more.

While sour cream clocks in at around 20% butterfat, creme fraiche is the overachiever of the two that aims for around 30% fat content.

The extra fat makes it less likely to curdle under heat than sour cream, so creme fraiche is a very suitable choice as a sour cream substitute for cooking uses. 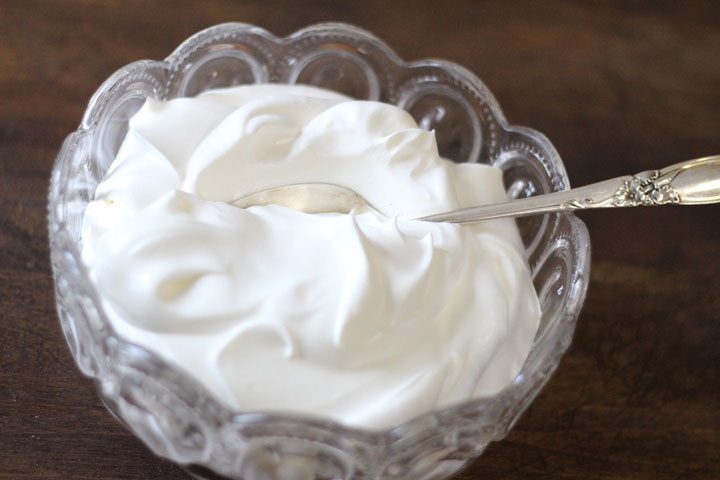 Like the last few substitute options, this is more liquidy than sour cream so it’s not the best substitute for situations where the texture is key.

Because heavy cream has a high fat content, though, it will stand up well to the heat for any stovetop recipes.

Yes, there is such a thing that you can buy from specialty stores! Typically made with soy, this is a super convenient option for those on a plant-free diet.

Just remember that like all packaged food products, there is always the possibility of added ingredients or sugars, so read the label to make sure you like what you see.

Just as there is a way to make homemade sour cream, you can try your hand at making your own vegan sour cream too.

Just blend some silken tofu with a touch of apple cider vinegar, lemon juice, and salt to concoct your very own sour cream substitute. 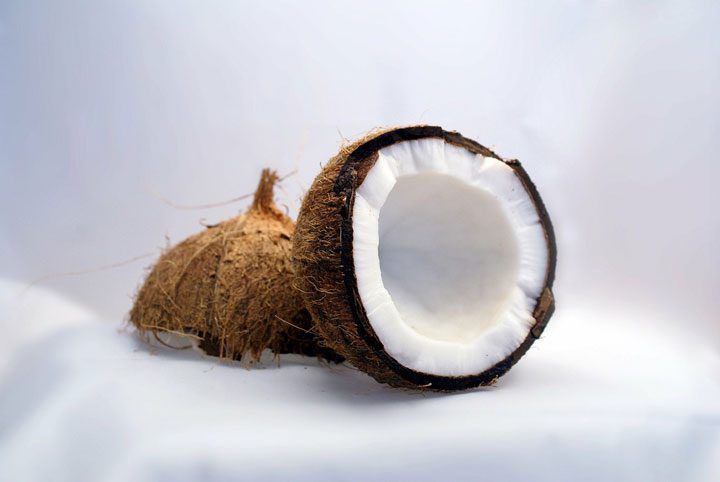 Canned full-fat coconut milk is a dairy-free sour cream substitute that you can use either as a sour cream-like topping or in cooking recipes.

To create a worthy dollop, skim the cream that rises to the top of the milk and blend with salt, apple cider vinegar, and/or lemon juice to mimic the sour flavor.

If you’re just throwing it into a recipe, it’s ok to use the milk itself with a little lemon juice mixed in. Either way, be mindful that your dish might take on a slight tinge of coconut flavor depending on how much you use. 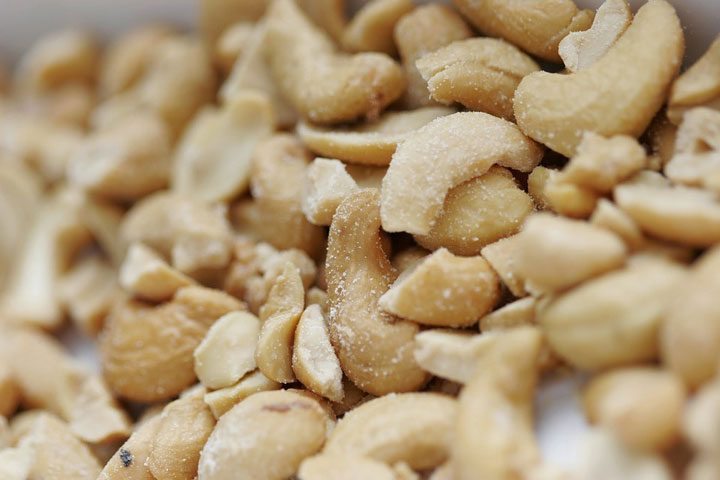 Veteran veggie-heads already know that cashew can be blended into a creamy consistency that works wonders as a thickener. This sour cream substitute isn’t recommended for baking purposes, but it’s perfect for soups and sauces.

Soften the cashews first by leaving them soaked overnight, then blend with a little vinegar, lemon juice, and sea salt.

Best sour cream substitutes by use 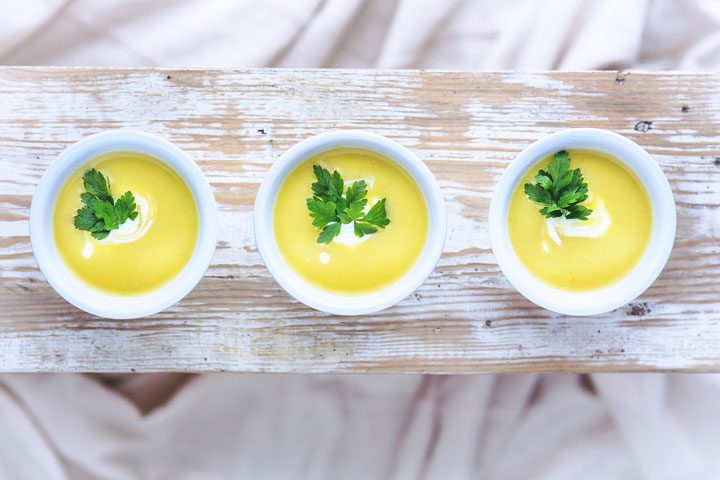 If your recipe calls for sour cream to be added while the soup is cooking, you’ll need a substitute that can stand up to those high temperatures too.

Yogurt and anything dairy-based that’s low fat is likely to curdle in the heat, so go with something like heavy cream.

Cashew cream would also be an excellent thickener that obviously won’t curdle.

It’s actually more common to find yogurt than sour cream used with curries, so yogurt is a perfect choice as a topper for curry.

The coolness of the yogurt will be a delightful contrast to the spiciness and heat of your curry dish. 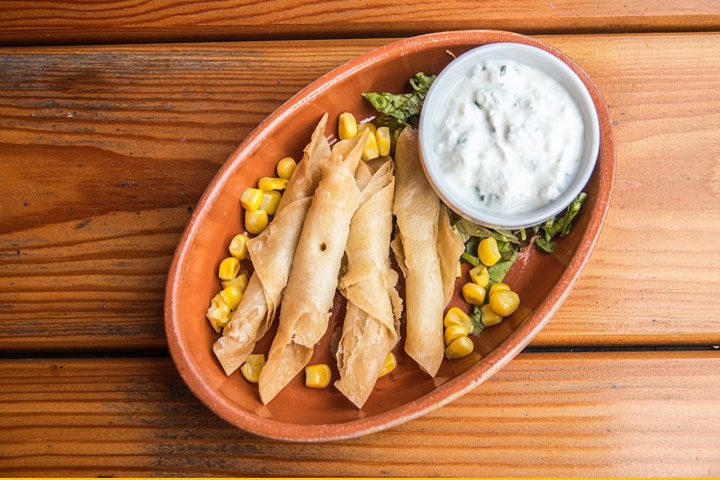 Texture is a biggie if you’re trying to replace sour cream in a dip. It’s all about the creamy feel, which yogurt and mayo can help provide.

Greek yogurt will be closer in taste to sour cream than regular yogurt, but the latter will match the texture of real sour cream a little better.

This one is a no-brainer for us: Greek yogurt is our hands down favorite sour cream topping substitute.

It tastes great not just on tacos, but also on baked potatoes, chilis, soups, curries, and anywhere else you’d normally find a dollop of sour cream sitting. 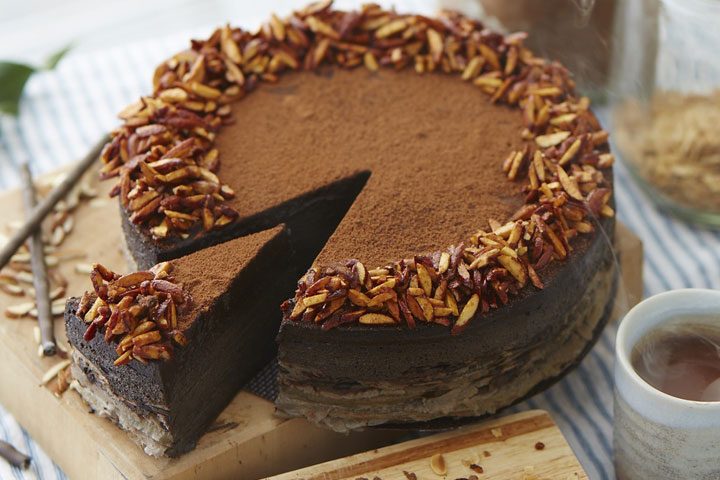 To make baked goods, you need to find ingredients that play nicely together to create the all-important chemical reactions.

Your best choices for this job will likely be buttermilk or kefir since they both will have the lactic acid needed to react with the other ingredients. 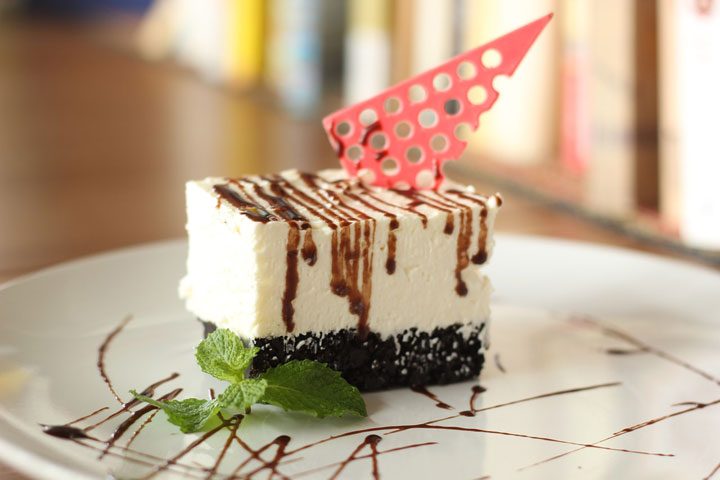 Cheesecake is dense, and ideally your sour cream substitute of choice should support rather than alter the desired texture.

Even yogurt is a little too thin and soft, so our vote is for plain Greek yogurt, which is nice and thick.

The fat content will be important, so try to go for a whole milk yogurt rather than a lower fat version.

Looking for a sour cream substitute that suits your dietary restrictions or taste? Or, are you well into a recipe and just realized you don’t have any sour cream in the fridge?

Either way, we’ve got plenty of sour cream replacements for you to choose from. We’ll show you exactly what you alternative options can use if you don’t have sour cream.