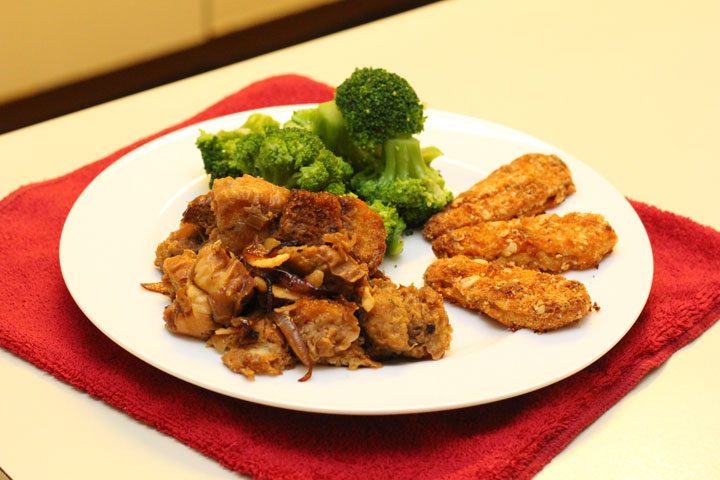 Inspired by the classic flavors in French Onion soup, this delicious French Onion stuffing uses deeply-caramelized onions to create a bold taste that is sure to satisfy.

Learn how to make an easy, homemade Thanksgiving stuffing recipe with a creative twist that will wow your guests at your next dinner gathering! Disclosure: Opinions expressed are our own. If you buy something through any of our affiliate links on this page, we may earn a commission at no extra cost to you. Thanks for supporting our site!

Thanksgiving stuffing with a twist

French onion soup is traditionally off-limits to vegetarians, since it is made with beef broth and gruyere cheese (which uses animal rennet).

That’s why we’re extra excited to share this creative recipe, which is both super delicious and vegetarian-friendly!

We felt like making a heartier stuffing this past Thanksgiving and thought it might be neat to use French bread as the base.

To make our stuffing vegetarian, we replaced the beef broth with vegetable stock* and let deeply-caramelized onions infuse the dish with incredible flavor. 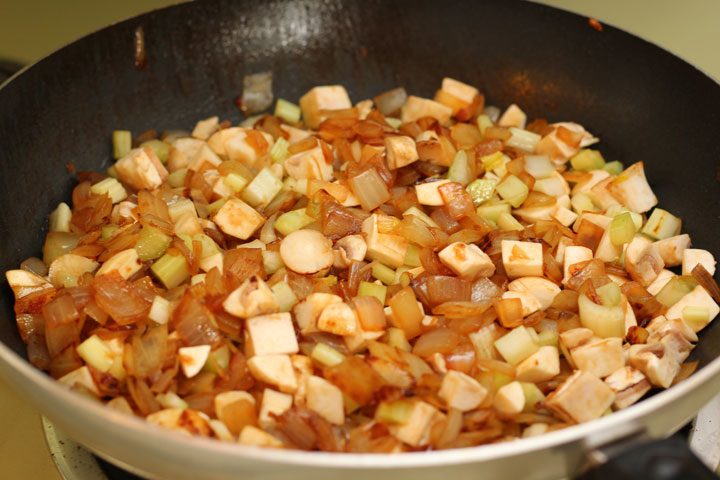 We also went with shredded mozzarella as our choice of cheese because it would provide the right texture and color, while having a mild enough flavor that it could still fit into the French onion soup flavor profile.

Good French onion soup also has a top layer of crunch, which is usually provided by croutons or thinly toasted French bread.

This recipe uses crispy fried onion topping* (like what you’d sprinkle on a green bean casserole) to give it that satisfying crunch.

Our stuffing was good enough to win “best tasting stuffing” at a small local contest we entered.

It beat out other carnivorous contenders like bacon/jalapeno/pepperoni and smoked meat stuffing. Give it a try and see why those other meaty contenders didn’t stand a chance (wink)! 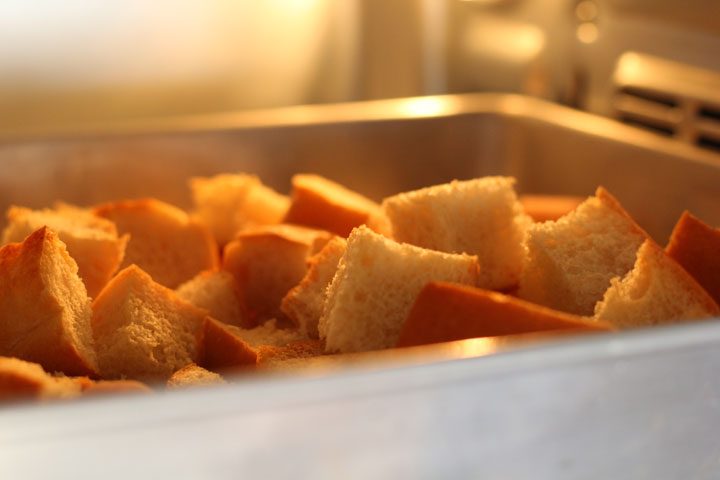 How to Make French Onion Flavored Stuffing - Step by Step

Step 1. Spread out bread cubes on a large sheet pan* and bake in oven at 350 degrees for 15-20 minutes or until bread is dried out and toasted. Mix cubes around a few times during baking for even toasting.

Step 2. As bread is toasting, combine diced onion with 2 tablespoons of olive oil* and a pinch of salt in a 5-quart pot*. Saute over medium heat until medium brown, about 15-20 min.

Step 3. Add celery and mushroom with onions, continuing to saute another 15-20 minutes until onions are deeply caramelized. Stir frequently to prevent burning.

Step 4. As the vegetable mix is simmering, saute the julienned onion in a skillet pan with olive oil and pinch of salt over medium heat for 15-20 minutes until deeply caramelized.

Remove from heat, season to taste with salt and pepper, then set aside for later use.

Step 5. Mix in 1 tablespoon of butter into the pot of mixed vegetables and saute for another 5 minutes.

Step 6. Deglaze the pot with white wine, then add vegetable stock* and some dried thyme*. Simmer for 15 minutes, then season to taste with salt and pepper.

Step 7. Put the bread cubes and mixed vegetables into a large mixing bowl* and fold to combine until thoroughly mixed and bread cubes are moistened. Add extra vegetable broth* if more moisture is needed/desired.

Step 8. Press mixture into a buttered 9 x 13 baking pan*, then dot the top with several ½ inch cubes of butter.

Step 9. Cover the pan with aluminum foil* and bake at 375 degrees for 25 minutes.

Step 10. Remove pan from oven and discard foil. Spread the cooked julienned onions evenly over the top of the stuffing, top with shredded mozzarella cheese and fresh ground black pepper. Return to the oven and bake for 10 minutes or until cheese is melted.

Step 11. Remove from oven and let cool for at least 10 minutes before serving. Just before serving, top with fried onion topping*. 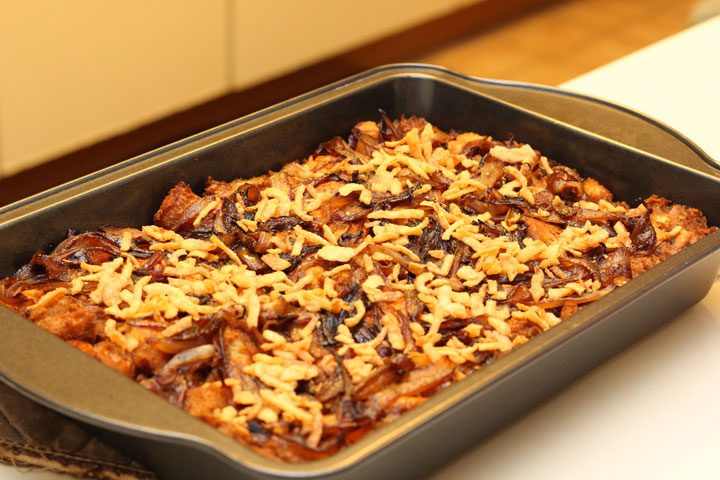 As an Amazon Associate and member of other affiliate programs, I earn from qualifying purchases.